Made some good progress in the Popcorn Patch today.  Well OK it’s more of a row than a patch; and I’ve interplanted some snow peas and cucumbers.  I got the weeds out of a good chunk of the row; then watered thoroughly, then laid some mulch down.  For those of you who don’t know, laying mulch down after a good rain (or in this case, watering) will help keep the soil moist; and it also prevents weeds from taking over again.  An added bonus is that mulch will also enrich the soil as it decomposes.

For many years, I’ve been mulching with whatever leaves I can get.  Come fall, I travel around the neighborhoods with my trailer and pick up as many bags of leaves as I can,  This of course has to happen after I help my Honey Pie get the leaves off the lawn at our house.

I didn’t get as many leaves last year as I was hoping; and I’ve used some already.  However,  I’ll need the rest to make “leaf dust.”  I pulverize leaves with our lawn mower and then sift the leaves to get a nice pile of really small particles.  That’s the perfect stuff for getting in between the carrot seedlings you see.  Anyway, I didn’t want to use up all my leaves, so I pondered a bit on what to use as mulch for the popcorn,

Our trailer is full of wood chips right now for my Beautiful Honey Pie’s ornamental gardens.  I’ll use some too, for covering my walkways in the vegetable garden.  But since the trailer is full, I won’t be using it to get more mulch right now.  During this time of year everyone’s bagged leaves are long gone, so I’ll go after lawn clippings.  Those are in bags too, but again, I need the trailer to go get them.

The answer:  use weeds for mulch!  Say what??  Well you see we are blessed with 5 acres, and although we only use a fraction of it; there are lots of “wild” places where all kinds of things grow.  One area behind the vegetable garden is near our pond.  I’ve mowed the monster weed growth a couple times; and have even planted some squash down there.  But there’s also a large stand of very tall weeds down there.

Today, the light bulb lit up inside my tiny brain.  Might as well use those weeds for mulch!  So I grabbed the wheelbarrow and the sickle that our Good Friend Mike gave me; and got to hacking weeds.  Also cut some new growth off the sumac saplings that were down there.  Turned out to be the perfect material for mulching behind the corn.  The photos below are not the best quality because I took them with my phone, but you can click them to get a better view. 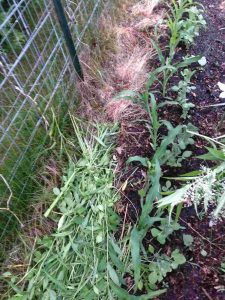 I showed my beautiful girlfriend my idea and she was a little doubtful.  “Won’t they make more weeds?” she asked.  A very good question!  The key to using weeds for mulch is to:  1)  make sure the roots are removed first and Q) make sure you don’t use any weeds that are going to seed.  Flowers are OK, but seeds are not so good.

Because the weeds I used are green, they won’t rob any nitrogen from the soil.  They may even add some.  And the worms will love my offering.  And to top it off, all I have to do is wait, and I’ll have plenty of new mulch growing in the back!

Anybody remember that old commercial slogan, “did you eat your Wheaties today?” Well if you do, you may not want to admit it; because it means you are getting older. Maybe not as old as me, though. I’ve said it before and I’ll say it again: I’m old enough to remember when The Beatles came to the US on the Mayflower!! Sure, I can remember that; but I can’t for the life of me remember when I had my last bowl of Wheaties.

Well, this post is about a bowl of “Weedies.” Yes, I’m talking about just what you might think that means. During this time of year, I’m known to feed weeds to my to my Beautiful Girlfriend and our family.  We’ve eaten them many times, and we all survived! Yep… I’ve made many a “skillet dinner” and weeds that I harvested from the garden were thrown in there for extra yumm and nutrition.

My two favorite weeds from the garden are delightful, annual “volunteers,” as Grampa Bunny would call them. In other words, I didn’t plant them… they just magically appeared from somewhere. Some of you may recognize them: lamb’s quarters and purslane. Click on the images for a better view. 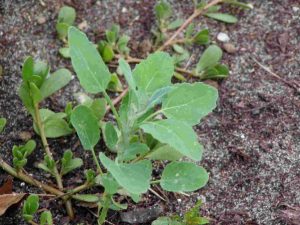 Lamb’s quarters above, purslane below.

A closer view of purslane.

Before I knew better, I spent several years cursing their very existence. Now we are glad to see them because they are one of the first things that are ready for picking in the garden. But one may well ask, “ummm first things ready in the garden?? Aren’t they weeds??” Well lots of folks call them weeds, and as I said, I thought that way also. Then I learned that both plants are not only edible; but taste pretty darn good! And an added bonus is they are packed with vitamins and minerals!! And to top it off, purslane has the highest concentration of omega-3 fatty acids of any leafy food plant.

Yet another cool thing about purslane:  it’s a succulent, which means it requires very little moisture to survive.  It lays pretty flat to the ground and becomes a sort of “living mulch” as it spreads.  This is good for the plants I actually wanted to grow.

Lamb’s quarters have been eaten by humans for thousands of years, and have even been cultivated as a food crop.  Just like purslane, the leaves and tender parts of the stems are of course edible, but lamb’s quarters seeds are very nutritious too.  Those are great in soups and stir fry dishes (can you tell I like skillet recipes?).

But hey, we just eat them because they’re yummy. We like lamb’s quarters and purslane either cooked or raw in salads.   Sometimes I’ll bring them to work for lunch. I think my friends at work are beginning to wonder whether I’m from a different planet. I often kick off the silliness by announcing what I’m going to eat:

“I’m having weeds today… anybody wanna try some? I picked them from the garden.”

“You actually eat the weeds??”

“Oh yeah,” I reply. “I actually mulched some of the purslane because it was doing really well. I wanna get some more of that stuff.”

Then comes a few quizzical looks, and the question, “you actually want weeds to grow in your garden??”

“Only the good ones,” I say, smiling. Then the person or people will get a glazed look over their face… and I can tell they don’t really want to know any more.

There is hope for us “weed eaters,” though.  Restaurants, for example, are getting interested in wild foods again; and “weeds” like lamb’s quarters and purslane have gained recognition as valuable additions to various dishes.   Apparently they’re even being sold at local markets!!  One year our daughter confessed that she paid $4.00 / lb for lamb’s quarters.  I couldn’t help but chuckle when I heard that, and told her I had all she would ever need for free.  This year I did try to sell her some at $3.00 / lb; but she wouldn’t take the bait.

Oh well, maybe when I retire I’ll try selling some weeds.  I’ll need the money a lot worse then I’m sure.  I can picture it now… a customer leaves my house in a hurry with a bag full of purslane on the front seat.  They get stopped by the police for speeding, and the officer spies the produce and says, “what’s that on the seat there?”

“Oh nothing officer, I just bought a bag of weeds.”